Our longest serving import, Jamie Manning first came over as a 19 year old tearaway quick with a serious front foot no-ball problem. Lightning quick with the ball and prolific with the bat across his 11 Seasons, Jamie became part of the furniture at KP and went on to Captain/Coach the Club for 2 Seasons from 2012/13 – 2013/14. With a truckload of Bowling, Batting, Club Champions and Team of the Decades next to his name, he finished his time at Keilor Park as an overused part time off spinner and reliable middle order batsman.

Recently, this Cheeky Devil spoke to Jamie and we spoke about the good times of the past, and what he is up to at the moment.

“Keilor Park was fantastic. Some of my life’s best memories were created on the field and in the Clubrooms with the many great friends I made. 11 Seasons, and the only one I missed was the Premiership!! Half my luck.

At the moment, I am playing for Calmore Sports Cricket Club and we have managed to win our way into the National Village Cup Final, which is being played at Lord’s in September. These days I don’t bowl, or bat often. I stand at first slip and give some advice to the opposition players when I think it’s necessary. 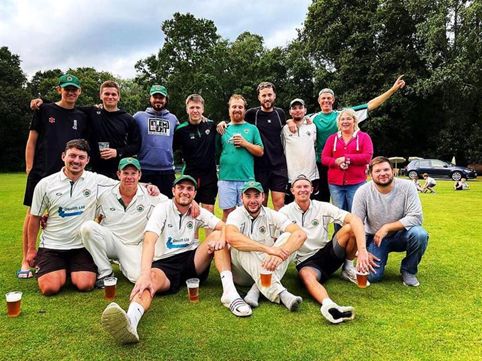 Jamie Manning (Front Row, Second from Left) with the rest of the Calmore Sports Cricket Club after winning the National Village Cup Semi Final. The Final is due to be played at Lords, The Home of Cricket, in September.

I’m really looking forward to the next couple of months of cricket and look forward to following the mighty KPCC from afar across the 2021/22 Season.”

The Keilor Park Cricket Club family wish Jamie and the Calmore Sports CC the best of luck in their NVC Final. 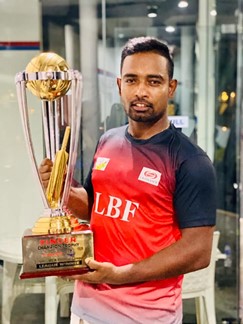 At the beginning of the 2011/2012 Season, we saw the arrival of one of, if not the, most dynamic cricketers ever to come through the doors at Keilor Park Cricket Club.

Lakshan “Lucky” Rodrigo made his name as a hard hitting and quick scoring Opening Batsman who could take the game away from the opponents in the blink of an eye.  With more than handy leg spinners in his artillery, and speed and agility in the field, only consistency stopped Lucky from becoming and International Cricketer.

His time at KP is littered with highlights.  His 122 in a T20 against St. Bernard’s was a clinic in T20 batting and could have been higher if he didn’t go out in the 14th over!!  He also made it into triple figures with a 161 in the final round of the 2013/14 Season when the side needed 350+ in 70 Overs to avoid relegation.  A feat made more incredible after he tore his hamstring while in the 80s.

These days, Lucky is clearing fences all across his native Sri Lanka, where he currently plays for the Sebastianites Cricket and Athletic Club.

When asked a few questions, Lucky was only too happy to provide the following answers:

Lucky also said he had great memories of his time at Keilor Park, and always makes sure to check the results each weekend to see who is doing well.

After a quick dive into the rabbit hole that is online cricket results, we have learnt that Lucky was Captain of the LB Finance Team, which won the Singer Champions Trophy in the Mercantile Cricket Association in 2019.

The Keilor Park Cricket Club family wish Lakshan all the best with his future in Sri Lanka, and hopes to see his big smile come into the KP Pavilion the next time he visits our shores.